Released to Windows Phone Store on 21st April 2015, Emoji Studio is an art app that lets you place, resize, and arrange any of the characters you can type on the Windows Phone keyboard, including Emoji!

(Emoji Studio gathers anonymous metrics, based on users opening the app and exporting images. I collect phone model and image resolution only.) 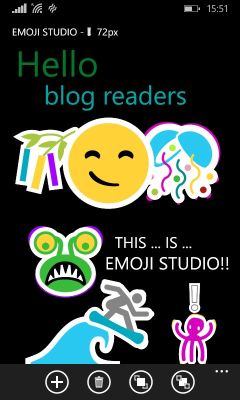 I made it initially as a tech demo to see what would happen to the built-in emoji if you could resize them to larger than they appear in text messages. The results were fun, so I restructured it into an drag-drop app, and then added pinch to resize. The project went on the backburner for a few months while I figured out what I needed to polish to make it worthy of the store.

I had a test version on my phone for a long time to help me focus on making the right interface decisions. Some things changed from early versions:

It is available on the Windows Phone store now. You can follow this Emoji Studio on Windows Phone Store link, or search for Emoji Studio, but beware that it’s about the 10th app on the list! If you want to help with that situation, please leave a good rating! :)

Making apps for Windows Phone is fun (and easy if you know the .Net stack), and watching the downloads number go up is pretty exciting! Keep your eyes out for my next one…