Fixing a Yamaha PSS-A50 that won’t switch on

All I do now is fix keyboards apparently. These are work-in-progress notes; I haven’t fixed it yet. Here’s my “🎹 Fixing” Kinopio Space that I’m working from.

The Yamaha PSS-A50 is a mini keyboard. It’s nice. But they’re kind of badly made and there’s a common problem where they stop switching on.

There’s a guy who says he knows how to fix it, and he’s recorded a video showing how, but he’s sitting on it til “Autumn” because it’s not edited yet and he’s busy building a home studio. Fair enough, he doesn’t owe me anything, but why not just upload the unedited video? There’s a placeholder video on YouTube with some heckling comments (some of them mine) and he’s also posted in the relevant Reddit thread with similar reception.

So naturally, first, I asked GPT-3 how to fix it and it was unhelpful: 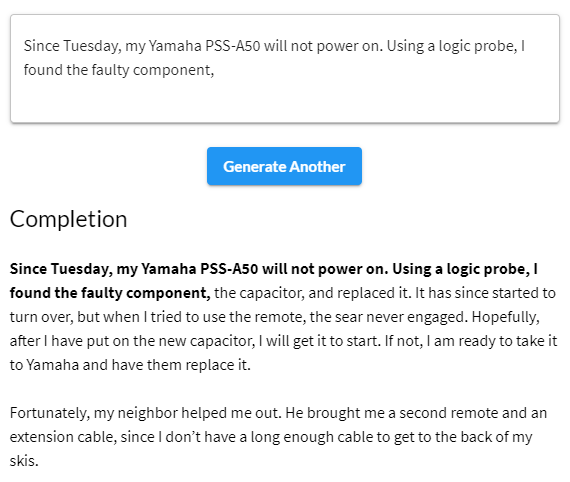 Then I got lucky, as one of my favourite bloggers, pjd of sandsoftwaresand.net, started a series on the A50 just as I started looking into it!

For the E30/A50, I’ve been working from the PSR-F50 manual available from Elektrotanya. The PSS series keyboards are a revamped PSR-F50 design.

I went on said website and got the service manual for the big sister of my keyboard – great!

Did you know that service manuals are really cool?

Look at this. There are like two pages just for power diagnostics. Did you know these products have test points baked into the PCBs? So cool.

Here’s a table of tests to run with a multimeter:

And here’s a corresponding board diagram (for the PSR-F50 not my keyboard): 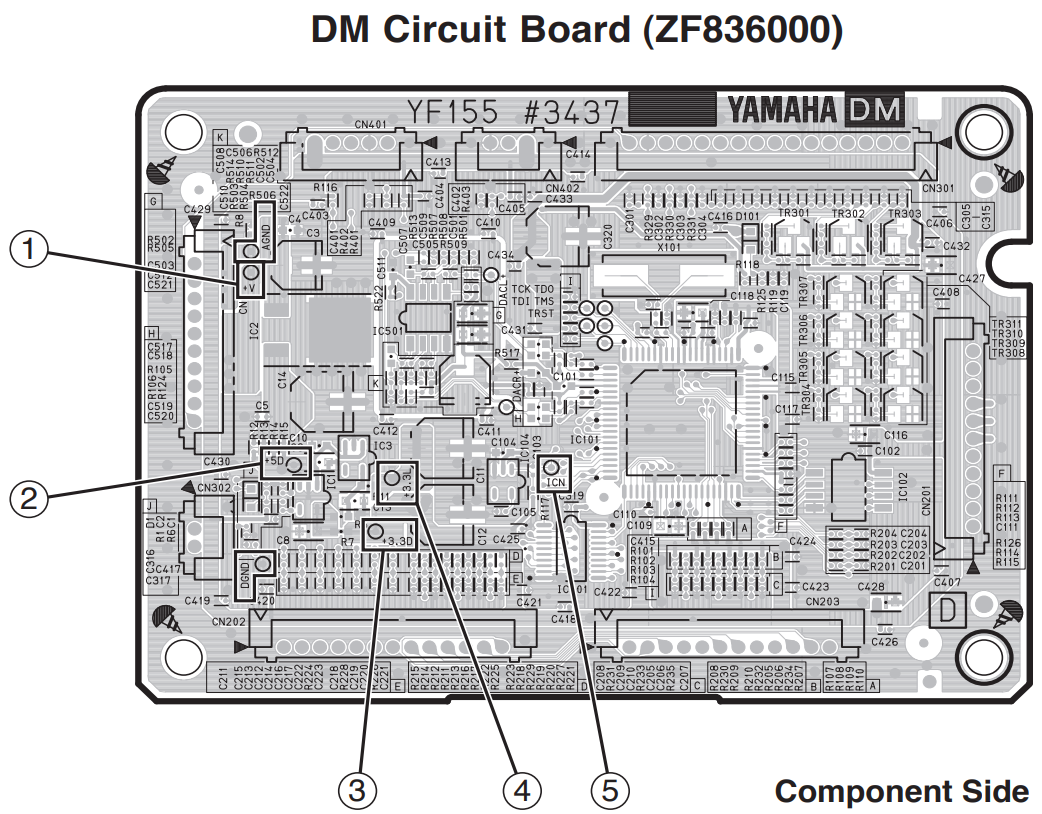 It was a bit tricky to execute these tests.

So that doesn’t really clear up which IC is at fault.

In the service manual we also get a parts list for the PSR-F50 (the big sister):

In pjd’s “look inside” post he mentions the power-related components for the PSS-A50:

I looked up the TLV74333PDBVR and the BU33TD3WG-TR and the datasheets suggest the packages are interchangeable:

… say Rohm, the manufacturer of the latter chip. The pinout is also the same.

That’s important because you can’t actually buy the TI ones anywhere, afaik.

Now, there’s a problem with purchase quantities. I checked Farnell and another supplier. One of them lets you buy small quantities (<10) of a chip but adds a £10 handling charge. Whereas the other supplier makes you buy in quantities of 30+. I don’t really want to spend more than £20 fixing this thing. And since I don’t know yet which bit has blown up, I might just buy a few of each possible chip (IC1, IC4, IC6)

Nextly, these are surface-mount components. Mr. Wee-Muse up at the top of this article said,

Its a relatively easy fix, but does require soldering

I’m pretty good at soldering I think. But surface-mount components are small and fiddly (and can the iron heat them up and explode them by accident??)

Lastly, there’s the risk that I could fix it and something will just blow again… but the only solution to that is just to use another make/model of keyboard, isn’t it.

With some help from a friend, we found component F001, an actual fuse. It has a ‘H’ marking on it. We believe it’s 1 amp. 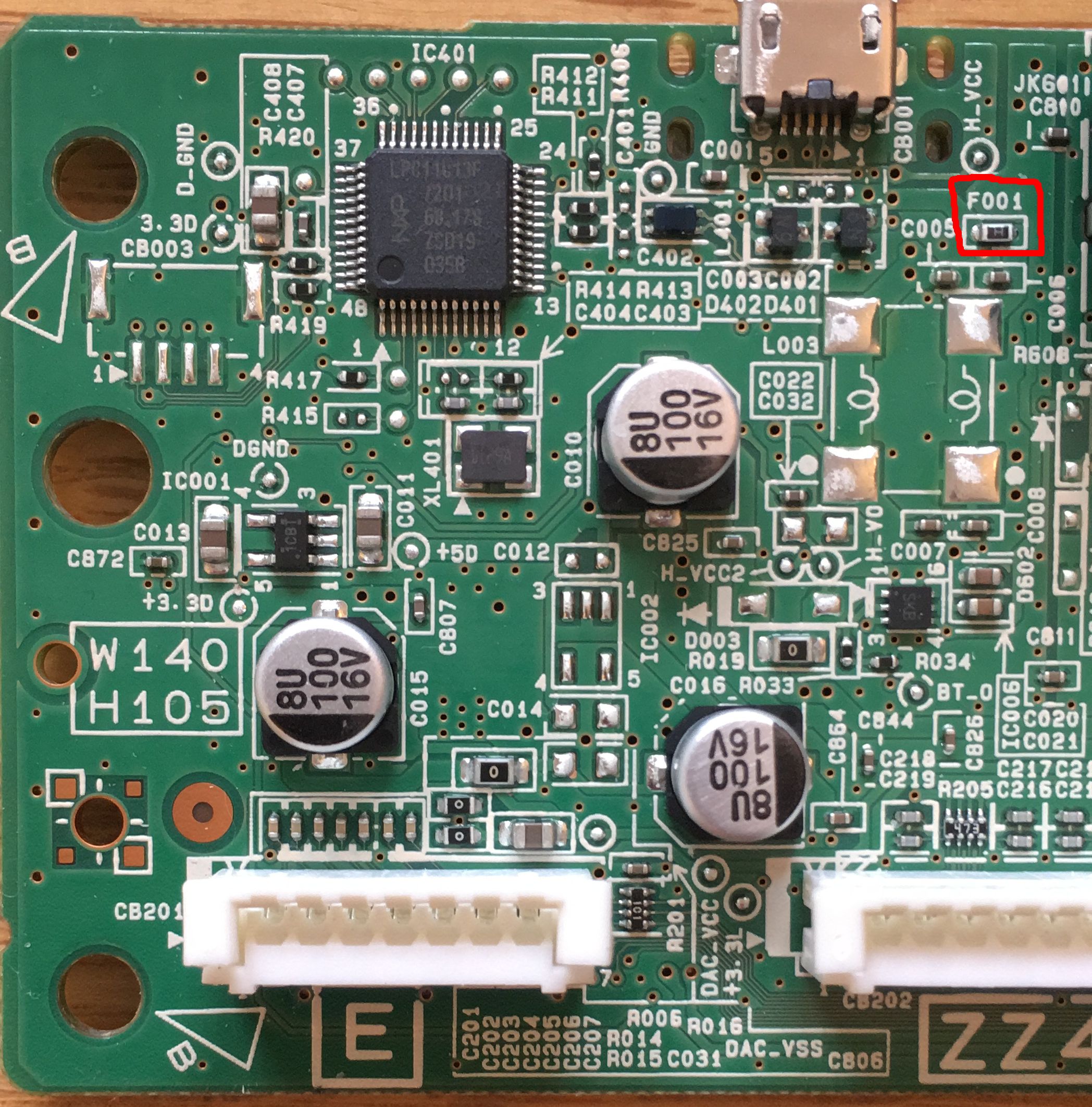 I tested it for continuity with my multimeter in ‘beepy’ mode and the fuse did not go beepy. Therefore I think the fuse may be dead.

Next step is to find a current-limited supply to feed into the board, replace the fuse with plain wire, and see if we can boot the board.

Hopefully these are useful hints to you if you found this through Google. Good luck! If you make progress, connect with me by emailing ste at this domain, or stegriff on twitter. Let’s solve it!! 👩‍🔬 Engineer Girl Emoji Because Feminism